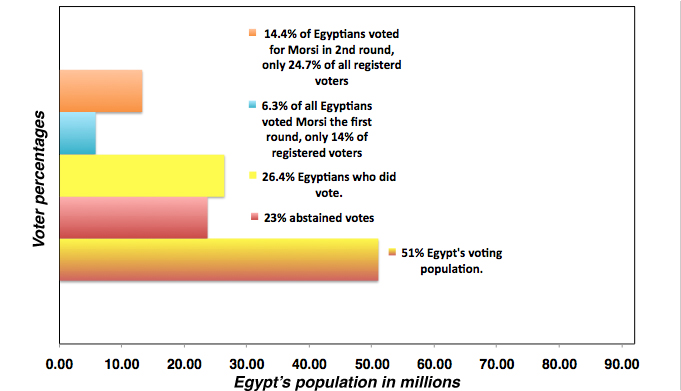 The streets won a small battle last night.  After a nine hour meeting between the government and some opposing parties, the constitutional decree was partially rescinded, meeting one of the demands on the street.

The draft constitution continues on its course, however, and will go to the polls on Saturday December 15, 2012.   Morsi has said many times that he was elected by majority, 51% in fact, and it is that majority he is banking on right now.

The numbers in perspective

Lets go back to May of this year, when we had our first presidential elections, and everyone was pumped about a democratic Egypt.  Based on a population of 92 million with a voter turnout of 28.7%, his initial 5.8 million votes was support from little more than  6% of the entire Egyptian population.  Even among voters he only had 24.7% of votes. In the run-off his 13,230,131 total vote count was the voice of only 14% of the population, but it’s the 51% of voters that Morsi is banking on.

What it really means is that 86% of the people of Egypt, me being one of them, did not give their voice to our current president.   Morsi came in to lead a country whose social, economic and political systems were in turmoil, and a people that didn’t really want or trust him or his band of brothers.   It was a recipe for disaster.

President Mohamed Morsi only got 24% of eligible votes in the first round. 76% of the voter population either refused to vote for him, or were not encouraged enough to go to the polls and give their voice to anyone.

Could have Morsi done it differently?

Nasser Amin, General Director of The Arab Center for the Independence of the Judiciary and Legal Profession and an anti-Mubarak activist since 1988, gave me the answer to that question on February 16, 2012.  Amin focused his work on understanding transitional justice, preparing for the eventual removal of former President Hosni Mubarak in order to help ease Egypt into a democracy.

“Above anything else, transitional justice in any revolutionary country serves to calm the people and give them pride in the success of their fight and ease the pain of losing loved ones,” he said

Amin’s transitional justice plan was simple.   Create an independent, government-funded and fully transparent truth and fact finding commission to work on fact-finding pertaining to cases that address the issues on which the revolution was ignited (corruption, police brutality, government embezzlement etc.).  Use special courts to try crimes committed during and leading up to the revolution.  Appease the families of the martyrs through concessions and by building a memorial for them. Create a comission  And stop using force against protestors.

These steps intended to do one thing:  clear out the past, and usher in a new phase in Egyptian history.  They were simple , and did not require broad sweeping powers to the executive office.  Their success would do more than promote a single political power, it would build trust between a government and its people.

The Supreme Council of Armed Forces had ignored Amin’s suggestions, and dealt with the situation as if they were still in Mubarak’s Egypt.  The result was a divided country among enflamed parties.  He had hope that the next president would be someone who was a true believer in human rights and democracy.

Our president has disappointed us.  He’s dealt with political opposition in the same way as his predecessor, consolidated power to the executive office and broken most of his campaign promises (BBC:  Egypt: President Morsi’s 100 days in power).  More important, the Egyptian people are no closer to understanding the way our public institutions work, or what our specific rights and responsibilities are as citizens.   Instead, he’s given us a constitution that uses the same ambiguity as  its suspended version, and infringes on more rights. (BBC: Comparison of Egypt’s suspended and draft constitutions).

Nasser Amin put his final faith in the power of the streets:

“The revolutionary force is the base and it will be what changes Egypt.  This is the first time in Egypt’s history, from the days fo the Pharaohs  the decision is from the eyes of the street below, and not the eagle eye view of the high offices.  What is new is that the decisions come from the square and the streets and that egypt has a new force to make decisions that is very different from its traditional means.

Revolutions are not done by  88 million, they are done by half a million.   No one should worry, ever.”

Nasser Amin on Ibrahim Eissa’s show Al-Tahrir titled:  “What happens after a revolution?” 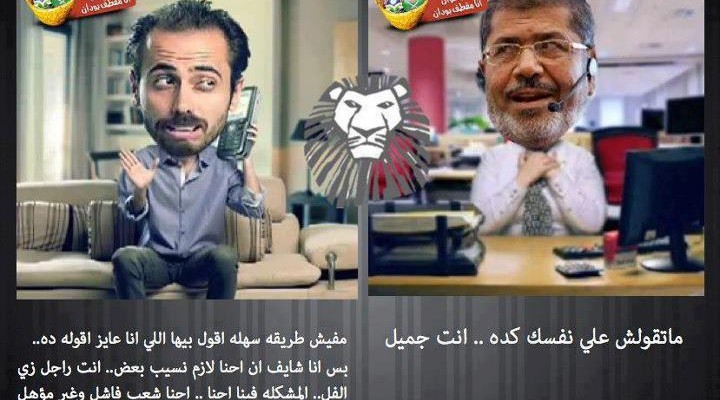 After 24 hours of rage, anticipation, stress and anger our president, Dr. Mohamed Morsi, decided to finally address his nation.  It was a speech that invoked the Business Insider headline: Egyptian President Morsi Is Starting To Sound Disturbingly Like Ousted Dictator Mubarak.

Shortly after, my neighbor, who has a bird’s eye view of Merghany St. and the Executive Palace, sent out this tweet:

Social media went crazy, friends in various places around Cairo reported that once apathetic citizens were now up in arms.  From my living room it all felt just way too familiar.

From a media standpoint, here’s what Morsi did wrong:

Feb. 2, 2011 Former President Hosni Mubarak attempts to regain the support of the people after deadly clashes break out in and around  Tahrir Square.

Dec. 6, 2012 – President Mohamed Morsi, in his first address to the nation since deadly clashes broke out in front of the Heliopolis based Executive Palace.

Images stick with people.  While they may not know how or why something looks familiar, their subconscious will trigger a very negative feeling.  By only changing the backdrop from blue (tranquility and peace) to red (anger and authority), President Morsi seems to be showing more force than his predecessor.

Not to mention, body language says it all.  The only hand gestures he used throughout his speech were choppy, indicating authority.   When he made eye contact, he was frowning, with the right side of his face angled down.  No reassurances there.

There seems to be an issue with the Arabic language in the Executive offices of the Middle East.   During the first six months of the Arab uprising, i was working with the investigative unit at the ABC News offices in New York City.   I was tasked with live translating all official speeches from Arab world , which was a serious challenge.   Mubarak continuously ignored grammatical laws and made up words.   At first, my insecurities allowed me to believe that it was my lack of language skills that made me unable to understand parts of the speech, but I quickly learned, it’s not me, it’s them.

Last night was no different.  I sat on my couch with friends that were born and raised in Egypt, and had an extremely strong grasp of the Arabic language. I kept geting confused, but was reassured when I saw they were equally flabbergasted.  Then, during the speech he spoke of article 6, and that his intention behind the article was to make clear and ”  أعنون “…    2o3anwen….

Wait… that’s not Arabic.. that’s Arab dictator speak for:  I’m so powerful I can make up my own language.

Authority and power that is wielded with a voice that shouts often is another common trait between Egyptian dictators.  During his speech, just as with Mubarak’s last few addresses, his tone is a mix of angry baba when you come home late from curfew and angry professor when you forget to do your assignment.

This type of tone is noninclusive, and doesn’t open the mental door of participation and working together.   But, it does galvanize supporters and polarize people.

Perhaps President Morsi should be given a pass on all the visuals and underlying tones of a speech.  He didn’t have much to learn from and everyone is going through a learning process.  However, his use of the same vocabulary as his predecessor, and ignoring the opposoition in the same way will only serve to destroy any support he may have.

Here’s a couple places where he went wrong:

1.  Morsi: The violence started on Tuesday December 4.  I attended the protests on that day. I was intimidated at first by the numbers I knew would be standing right behind my house.  But, I got home from my office in Downtown in less than 20 minutes, parked my car in front of my house, attended almost two hours of the protest and came home without ever feeling frightened.  I was not harassed, there was no violence and the people seemed to be in generally good spirits, positive about their ability to participate in political protests.

The next day, however, I could cut the tension with a knife.  I couldn’t park in front of my building (which turned out to be a blessing in disguise), and feared for my safety in the 10 minute walk from my car to my building through MB territory.  Over 6 hours I watched a battle rage under my house.

2.  Morsi: Baltagiya (thugs) have turned peaceful protests violent, and they were paid to do it per their own confessions:  Right after the president’s speech Yosri Fouda hosted two females who had been taken by the Muslim Brotherhood on the night of Dec. 4.   Ola Shabah’s face was so badly bruised she couldn’t see out of her left eye, and Lena Mujahid, who had obviously sustained injuries to her face and body.   Both say they were immediately asked who they were working for and taken into questioning about their involvement with a paying force.  They didn’t have proof, they were creating proof.    Luckily both girls were saved.

The same tactic of divide by spreading fear in the streets was used by Mubarak.  It also serves to paint parts of the opposition as deserving of a swift and violent punishment, while allowing the dictator to appear open to the idea of dialogue.

3. Disregard protestors demands as incorrect, yet call for open dialogue.  Perhaps Morsi is more guilty of this than Mubarak.  Mubarak recognized that a force was against him, spoke about it and then called for dialogue.  Morsi, on the other hand, disregarded all of the demands, reaffirmed the decisions that brought people out to the streets in the first place and then asked for an open dialogue.

Egypt is in dire need of a leader that can unite its different layers and people to work together for better social, political and economic systems.   Last night’s speech was indicative of a president who is comfortable with his party’s approval, and apathetic about the country’s needs.  It was Mors’s address to HIS nation, not the Egyptians.

A link to a 14 minute excerpt of the speech: