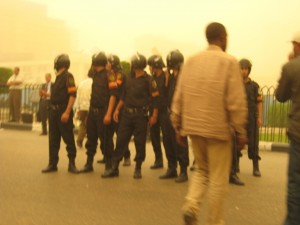 Sunday April 6 was a gloomy day all around.I wore black like I said I would, and went with the full intention of participating in what I felt was a unified voice against corruption.I was happy to see the streets empty.To me it meant people were taking a stance.I got out at Tahrir Square on my way as usual.Yet it was dark, because of the coming sand storm, and it was quiet.

Naturally security forces were everywhere.Dressed in their riot gear, they were prepared to strike at anyone who crossed the line.As I walked by, an obvious protester, I got menacing looks from all of them.I was frightened.

Students in the American University in Cairo pretty much stayed home.A lot of the professors didn’t want to deal with whatever the strike was, and decided not to hold classes that day.Many didn’t want to stand in the way of their students speaking their minds.Yet there was a fear that day that someone was going to get hurt.Of course there’s always the government you have to worry about too.

Some kids didn’t stay home.Some came to school, and protested in their own ways.Students went to Tahrir Square in hopes of making their voices heard, but their voices echoed in the silence around them.

The protest was thwarted by threats of imprisonment from the Egyptian government.People were scared, and the few that weren’t were stopped almost immediately.While I applaud the efforts of the strikers of April 6, this is not the way.

The last thing the Egyptian people need is to loose their young educated minds to the system of corrupt governance.When students from the Universities are arrested for lone acts of emotional outbursts it doesn’t help the cause.Don’t get me wrong.I’m not saying University students are useless.The South Korean regime was overthrown by University and High School students.I’m saying, if we want to do this, we need to do it right.

The government may have a lot of power, but history has shown that mass numbers makes a difference.Yet millions mean nothing if they can’t mobilize.So when my usually 20-30 minute ride took 8 minutes on Sunday morning I felt hope.Egyptians are starting to agree they can’t take it anymore, and they are agreeing to say something about it.