1:30 pm yesterday I started to seriously worry.  I came across a post by the official Freedom and Justice Party’s Facebook page calling for a protest after the late afternoon prayers at the executive palace in my neighborhood, Heliopolis.

“The Brotherhood and the the people are now called to protest in front of the executive palace late afternoon today, Wednesday.  And this is to protect the governments legitimacy after the extreme show of force it (the opposition) showed yesterday.  This force believed it could shake our legitimacy or impose its opinion with whatever force necessary on the people.”

The post was shared 3,646 times, liked by 1,774 people and got 786 comments. The force they are speaking of was a protest held by the opposition the night before.   The people packed around the palace walls, chanting and spray painting the infamous words “2er7al.”  That day the energy was intense, and the people were angry, but no one was scared.

But, now there were MB supporters headed to the couple hundred that had stayed overnight in tents. I was glued to my twitter and Facebook feeds for the next four hours.  News reports said the Brotherhood supporters had broken up tents by force, and were beating up protestors.  I wanted to get home, to make sure that my street was safe.    The events were unfolding right around the corner from my house, and I didn’t want to be so late I wouldn’t be able to get into my neighborhood.

Finally, at 6 I headed out of the Downtown area to Roxy.  As soon as I approached the vicenity of my house coming from Khalifa Ma’moun, I realized that this was worse than what I was seeing on my feeds and on live television.  A young man was diverting traffic, forcing everyone to take a u-turn.  Us residents were allowed through, but were warned that it was getting ugly. 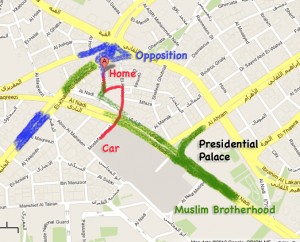 Within one block another young man stopped me, this time insisting that it would be impossible to get through.  I tried to argue a bit, but realized that it would be best to park the car away from the house if the clashes were raging so close.

I maneuvered through back roads, in search of a parking space, and found myself at the corner of the Heliopolis Sporting Club across the street from my block, and the midst of tens of MB supporters.  They all yelled at me to turn around, but I had found a parking space and I just wanted to go home.

As soon as I parked my car I had tense, jumpy MB supporters gathered around me, asking me what I was doing and where i was going.  The energy was tense, distrusting and chaotic, all the makings of a really long and bloody night.

At the corner of my street, Ahmed Wafik and the main street of Khalifa Ma’moun the two sides were battling it out with stones, Molotov cocktails, firecrackers and laser beams.   Yellow partitions that once shielded a two year government project to fix the neighborhoods water (were now protecting the heads of fighters on both sides.

Morsi supporters advance towards the opposition on Khalifa Ma’moun street throwing rocks and using anything that isn’t firmly planted on the ground as shields.

From my window I could hear a boom coming from behind the Brotherhood supporters.  The first time it happened I stood confused, breathing heavily.   Then the back of my throat started to burn, the intensity rising up to my nose, then my eyes.  My sinuses were on fire, and I didn’t have vinegar or coke.  I quickly shut the window and closed my eyes, waiting for the pain of the tear gas to die down.

Still, I stood transfixed at my window, watching the ebb and flow of a battle happening on my street. I learned to close my window when I heard the two booms, and worried that the clashes would move into my little neighborhood. 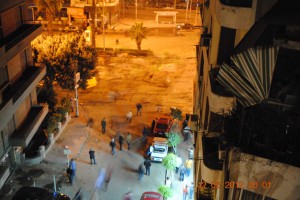 President Morsi’s supporters make a run for it when tear gas canisters fall short and land in the midst of the advancing human wall.

Just as the MB supporters were gaining ground, using a human wall protected by the yellow partitions, two  of the tear gas canisters fell short.  The wall went crashing down and men ran in every direction, including my street.

Halfway down, right in front of my house a group stopped and realized they were retreating. They started breaking up the sidewalk and searching for anything they could make a weapon.

I immediately realized that not all my neighbors were as lucky with parking as I was.    I started shouting down “People’s cars!! You are ruining people’s cars!!” 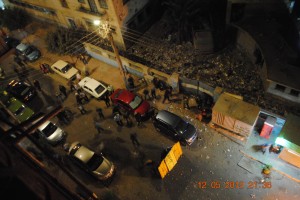 Morsi supporters advance from the left side of my building, and start an ebb and flow that lasted for more than 4 hours.

At first they paused, looking up at the crazy lady who was more worried about cars then the fate of her country.  Then I was ignored completely.

To my left supporters were coming in from the outside street with trash cans filled with rocks and carrying the yellow partitions.

Men young and old ran up to the front lines, and threw as hard as they could to the opposition, and retreated quickly.  Every once in a while one man would snap back, the struck area pulling the rest of his body off balance.   He would grab his wounds and quickly run. 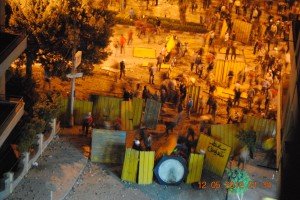 Protestors defend their hold on the entrance of Ahmed Wafik, while fighting off opposition fighters on the main street of Khalifa Ma’moun.

The stand off continued for more than four hours.  At one point brotherhood supporters were pushed to the very end of the street, but they made it back when the opposition eased its fire.

Despite the fall back, the protesters were able to build a wall out of the partitions.  They hid under it and threw stones and firecrackers down Ahmed Wafik.   Behind them their fellow fighters fought off the supporters coming in from Khalifa Ma’moun.

From my window, I watched for six hours, transfixed by what felt like the apocalypse unfolding in front of me.  I had no access to a television from there, and my internet was choppy at best.  So all I had to judge the situation on was what I saw in front of me.

Morsi supporters hide behind the kiosk to advance on protestors blocking the entrance to the main street of Khalifa Ma’moun.

At one point, I ran downstairs to check the security on my door, and to give water to anyone who needed it.  I was exhausted from just watching and couldn’t imagine what they were going through.  I opened the door to my building as supporters rushed the opposition.  One man ran up to me screaming “What are you doing??” I calmly told him I was locking the door and bringing people water.

His eyes dashed back and forth so quickly I couldn’t tell if he could hear me.   Suddenly he grabbed the water out of my hand, and ran down the street.  I took a deep breath and was hit with the stench of sweat, burning tires and dust.  I turned around to open my door, and a group of men came pleading to let me secure the street from my roof. “I can’t, I can’t” I said as I slipped in and shut the door quickly behind me and rushed back to my safe point at the window.

Clean up crews were quick to get rid of the stones covering my street the next morning. But some things, like the black stain of a Moltov cocktail, are not easily swept up.

I finally pried myself away from the window at half past midnight.  It had been an intense six hours, and it was getting to me.  I couldn’t imagine what life for Iraqis, Palestinians, Syrians and any other people in conflict was like. By 230 in the morning I had to force myself to shut off the television and try to get some sleep.

The next morning, I was met with a depressing site.  I felt like I had woken up in a war zone.  The streets were covered in broken stones, glass and dark marks where the Molotov cocktails had landed.   The clean up crew was already sweeping the street, but you couldn’t escape all the broken windshields and dents in my neighbor’s cars.

My neighbors were livid.    Political disagreements are a given in any country.  Misunderstandings in times of transition are unavoidable, this they knew.  But, while we don’t all agree on politics, we did come to one consensus: It is the basic responsibility of a president to keep his citizens safe, and President Mohamed Morsi did not do that.