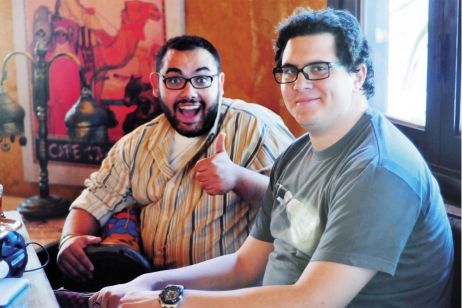 I walked into Cairo Jazz Thursday just as the members of High on Body Fat were stringing the opening chords to their first song. It was distinctly familiar, a tune i had heard before, but couldn’t place.  The duo Marwan and Safi, clad in their signature dark rimmed glasses and hats, opened with Arabic lyrics, confusing me even more. I liked the sound, but was trying so hard to figure out the song I wasn’t actually listening to what they were saying.

Suddenly, it came to me. Lady Gaga, Bad Romance. I focused just where she was supposed to sing, “I want your loving, I want your romance..” But instead I got: ‘”Mish 3aref 2a2af, Mish 3aref 2anam, yeb2a kalt bad betengan.” (I can’t stand, I can’t sleep, I must have eaten some bad eggplant) I cracked up, and they kept me laughing the rest of the show.

Politics, food, personal nuances, religion and fallen leaders. Nothing was off limits to Marwan and Safi. They even cracked themselves up while giving a stellar performance.  According to an interview they did with the Daily News Egypt right before their Arabs Got Talent run to the final round, they admintted it was sugar, not any other drug that kept them going. “We stay up as late as we can, stuff our faces with Twinkies and the songs just write themselves. Most of them get done in three or four hours.” Safi told DNE.

I met Marwan four years ago at the American University in Cairo, and had the pleasure of working with him on the school paper, The Caravan published his popular comic strip Driving Home, a parody on his own life. He was immense fun to work with, always laughing and cracking a joke. The Caravan staff worked late night Wednesdays, scrambling to meet the noon deadline for Thursday. Marwan didn’t have to be there, his strip was usually in on time, but every Wednesday he came in to help. He took pictures, helped with graphics and illustrations or just chilled, exuding his awesome vibes.

That’s the stuff High on Body Fat is made of. Two guys who really just like to let loose and laugh about the world. They aren’t out to prove a point or make a statement. They’ve got so much positive energy, all it requires is a sugar rush, on a crazy night they might introduce caffeine to the mix.